Kiener produces assembly lines for the semi- or fully automatic assembly of steering systems for passenger cars and commercial vehicals. Kiener´s range goes from low-budget manual lines, for low-volume products to highly automated lines for high-volume products which may be produced in 3-shift-operations. 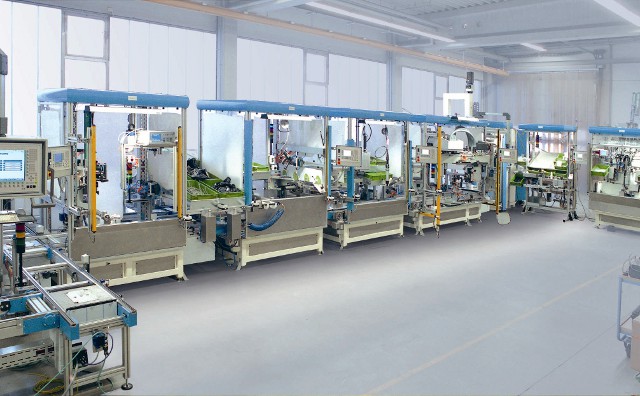 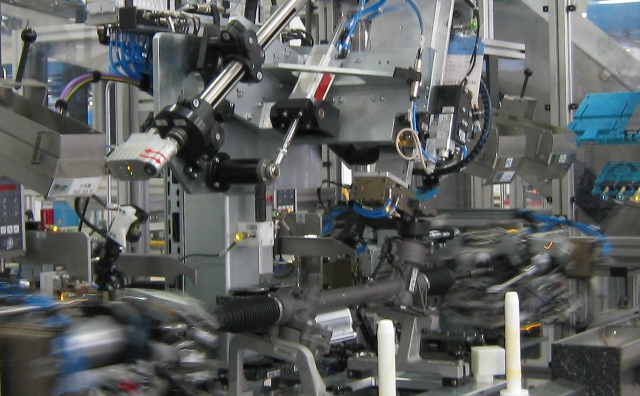 The customized assembly systems for steerings from the company KIENER are used for the semi-automatic and fully automatic assembly of passenger car and truck steerings of any type. The assembly systems are mainly based on a component carrier transfer system with free circulation or alternatively several rotary index tables. All required feeding, linking and handling fixtures are comprised. For linking and handling, also robots are used. The assembly is realized in several joining stations used e.g. for screwing, inserting or greasing. In addition, the systems include measuring and testing tasks such as assembly controls, integrated leak tests, electro-mechanical function tests as well as adjustment. Automatic stations as well as manual workplaces can be integrated in the production sequence.

The application range of customized assembly systems for steerings is the pre- and final assembly of automobile steerings of different types for passenger cars and trucks. These are used for the assembly of mechanical, hydraulic, electric steerings in monitored and documented quality. The system sizes cover cost-efficient, largely manual solutions for smaller quantities via standardized systems of mean size to largely automatic assembly lines for large quantities in 24 hours 3-shift operation. For the flexible assembly of different product variants, the change-over of the systems can be realized typically in less than 5 minutes. Further tasks comprise the adjustment and the 100 % control. User industries are the automobile industry and its sub-suppliers.

– Assembly and test of electrical and hydraulic components

The steering components are placed into part-dedicated supports on a component carrier and fed manually or by a component carrier transfer system to the process stations. Loading either manual or by an automatic handling system. The stations can also be linked by rotary index tables or for example be loaded and unloaded by robots.

Prior to the assembly, usually the parts to be joined are automatically detected by an identification system and are checked for correct type. Important joining processes are the force-path monitored insertion of parts which can also comprise greasing as well as torque- and angle-controlled torqueing. Manual workplaces are designed fool-proof and enable a manufacture in monitored and documented quality. Assembly parts are for example components such as rubber bearings, rings, ball bearings, ball joints, sleeves, sealings, pinions, toothed racks, valves, boots or closing caps. Typical testing and adjusting steps are e.g. presence and assembly control, electro-mechanical function tests, measurement of axial clearance or presetting of friction torque.

The customized assembly systems are planned, designed and supplied as turnkey solution by KIENER. The systems are realized as far as possible with modular components from our own manufacture in the requested automation degree. These can be designed flexibly for different product variants. Usually, manual assembly places are also required. For the assembly of mean quantities up to max. 220 000 parts/year, standardized assembly systems are available. As linkage, component carrier transfer systems with free circulation or rotary index tables are used. In the case of largely manual assembly, the operator hands over the parts. Feeding systems, linking and handling systems, the number and the processes of the stations as well as controls are realized according to customer’s requests.