The Kiener Transport System KTS+ Silence is an in-house development by Kiener
Maschinenbau GmbH. It is based on the modular principle and has a patented friction drive, which allows the workpiece carriers to be transported and the workpieces located on them to be moved at speeds of up to 15 m / min.
The transport system KTS+ Silence has 4 standard lengths, which range from 500 mm to 2000 mm and can be assembled in any modular way. Other special lengths are of course possible on request. Due to the above-mentioned modular principle complex belt circulations can be realized with only a few different modules. As a result, an optimized and above all efficient storage of spare parts is possible. Each of these individual band sections can be operated as a separate band segment with its own drive motor, or several band sections can be connected to each other up to a total length of 6000 mm and driven by a drive motor.
Due to the transverse belt coupling, which connects the two opposite belt segments, both sides of the transport system are driven and are ideally suited for the transport of heavy workpieces. The stopper, also developed in-house, enables the workpiece carriers to be stopped quietly and accurately, e. g. in automatic stations or manual workstations. The indexing unit is responsible for indexing, which lifts out the workpiece carrier by a few millimetres and allows it to be positioned precisely. This allows the workpiece to be machined without any force being exerted on the rollers of the transport system.
Corner turning stations enable workpiece carrier transport in different directions. These corner turning stations allow the workpiece carriers to be rotated through 90 °, 180 ° and 270 °. 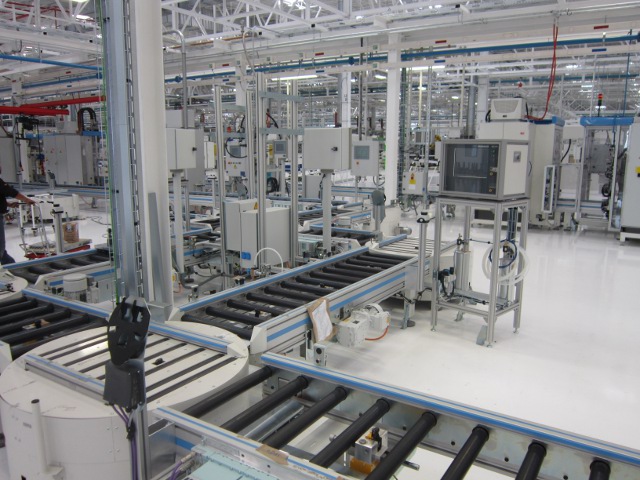 KIENER transport systems KTS+ Silence are driven, modular component carrier transfer systems for heavy units, for example for the build of engine and cylinder head assembly lines. Durable, hardened steel gearwheels transfer the force between the stub rolls with high availability. A patented, abrasion-free element produces the friction whereby, otherwise than by friction linings, the heat development is extremely low, even at permanent stub roll blockage. The adjustable torque varies between 0.1 and 0.5 Nm/roll. Speeds of 12 m/min, 15 m/min or 18 m/min are possible. Thanks to the encapsulated structure, the transport system is quieter than comparable systems. The transition between the belt segments realized by belts and not by toothed gears simplifies the alignment, especially in case of especially long lines. Corner turning stations allow turning angles of +/- 90 degrees and a cycle time of less than 20 seconds. The piling, buffering, separating and lift-out of component carriers is possible by automatic stops, separators and lifting units. Centralized and distributed control units can be integrated in the corner turning stations. Supports, automatic stops, wear and/or bearing parts are identical for friction stub roll conveyor and corner turning element.

The transfer system KTS+ Silence serves as linking system for the construction of complex assembly systems with any number of sub-assemblies. At the standard width of 300 – 900 mm, it is used for loads up to 2000 kg/WT. Important user industries are the automobile industry and its sub-suppliers. Typical application ranges are the assembly of heavy automobile units, engines, cylinder heads and gearboxes.

The KTS+ Silence disposes of a motor for every friction stub roll conveyor, provided that the transmission is not realized by toothed gear. Per conveyor segment, max. five component carriers are admissible with reference to the load capacity. Piling and buffering of component carriers is possible by automatic stops. During stopping, the rolls spin under the pallet. The uncoupling from the continuously running drive prevents damages of the conveyor and of the drive. In continuous operation, the component carriers are transferred by preloaded bearings on permanently driven stub roll conveyors. Basically, the conveyor sections consist of straight elements. Deflections are always realized rectangular by corner turning stations.

The modular system of the KTS+ Silence enables the order-specific delivery of turnkey conveyor systems which can be combined of any number of friction stub roll conveyors, corner turning stations, lifting units, automatic stops and distributed controls.